After experimenting with countless methods and over 500 flavours, Mai and Pearsall developed a proprietary process that produces complex, concentrated and consistently flavoured living vinegars.

Posted: Dec 15, 2021
by bioentadm for Bioenterprise 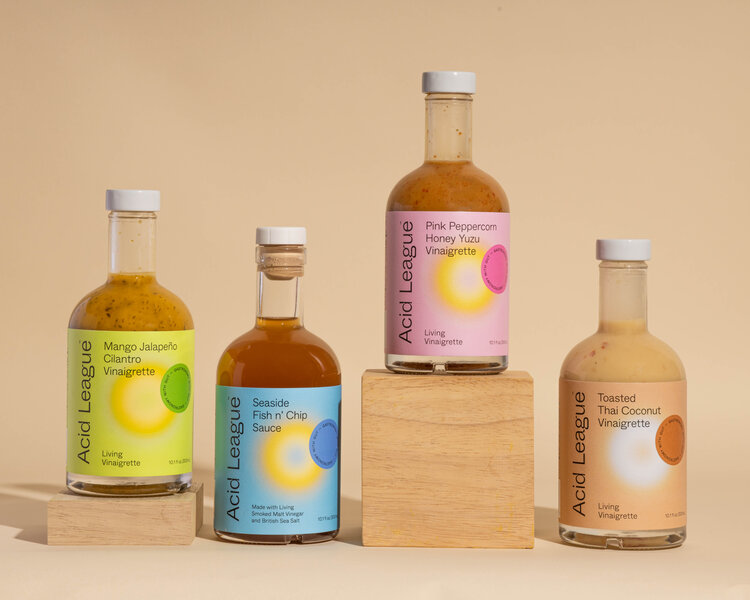 A company that has been turning heads in North America for reinventing an age-old staple traces its roots back to the University of Guelph. And this past year, their relatively short trajectory from start-up to supplying leading retailers in Canada and the United States has received a boost from Bioenterprise, Canada’s Food & Agri-Tech Engine.

Acid League was selected as a successful applicant in the second round of the SmartGrowth Program administered by Bioenterprise Canada, helping fund their expansion into manufacturing.

The gut health-boosting properties of apple cider vinegar have driven new consumer interest in the vinegar category. It was spring 2019 when University of Guelph food science graduates and Acid League founders Cole Pearsall and Allan Mai began working to reinvent vinegar with a vision to create bold flavours that would appeal to consumers seeking new taste experiences.

“Being food scientists, we take for granted that vinegar is used to stabilize everything at the centre of the grocery store, and the worst-tasting one, distilled white vinegar, is the one used the most,” says Mai. “Vinegar is a category where no innovation has taken place since balsamics came on the market, and there are so many interesting flavours that could funnel into creating truly differentiated products in those centre aisles.”

After experimenting with countless methods and over 500 flavours, from roasted coconut to honey nasturtium and Campari, Mai and Pearsall developed a proprietary process that produces complex, concentrated and consistently flavoured living vinegars. They’re raw, unfiltered and fermented with premium fruits, vegetables, herbs and spices.

A scant two years later, Acid League products are sold online and in over 3,000 stores in Canada and the United States, including Loblaws and their banners, Metro store in Quebec, Whole Foods, Publix, Albertsons, and more than 300 independents and smaller chains. Their product line includes vinegars, vinaigrettes, hot sauces, living tonics, and even non-alcoholic wines.

“We will end the year with 150 new products launched since August 2020,” adds Pearsall. “Our non-alcoholic wines are driving expansion into foodservice; we are starting to get into more restaurants who are adding us onto non-alcoholic wine lists.”

After creating and scaling up their artisanal fermentation process, Pearsall and Mai knew they needed to expand their capacity to keep pace with demand. The solution: to also become a vinegar manufacturer, which is not an inexpensive undertaking.

An email newsletter article about the SmartGrowth program led them to Bioenterprise Canada, and ultimately, a successful grant application. SmartGrowth provides recipients with up to $100,000 in non-repayable acceleration financing as well as coaching and mentorship services. Thanks to the funding boost, Acid League has been able to move ahead with developing and purchasing a custom fermenter.

“The SmartGrowth program has been very important for us strategically. If it weren’t for that funding, it would have been a much more difficult decision for us to allocate money to the fermenter,” Mai says. “We’re so happy to have been able to receive that support; without it, we would have had to wait for organic profits to fund this.”

Acid League is planning to move into a new facility in the south end of Guelph in 2022 that will house their new production; they’re currently sharing space with a local brewery in the city.

Bioenterprise is now accepting applications for the third round of its SmartGrowth Program from southern Ontario companies in the agriculture, agri-food, or agri-technology sectors to access funding and mentorship support services.

For more information on SmartGrowth and how to apply for the next cohort, visit https://bioenterprise.ca/programs/smartgrowth-program/ or contact Alexandra Coccari at alexandra.coccari@bioenterprise.ca.